Print has a world record holder and multi-gold medal winning world champion, in the shape of Ryan Brett of CPI Books Chatham.

Brett, who had a kidney transplant in 2015, represented Great Britain at the World Transplant Games held in Newcastle earlier this year.

Brett said he had “not always been sporty”, although he did run the London Marathon in 2013 prior to his transplant. His kidney was donated by a friend.

“After the London Marathon I didn't do anything up until late 2015, so after my transplant in March that year I wanted to do something so I trained for another marathon and completed the Kent coastal in the September,” he explained.

Brett, pictured below at the World Transplant Games, described the experience as “amazing and overwhelming”. 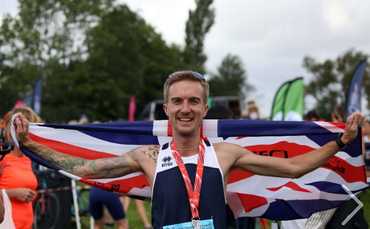 “The World Transplant Games were amazing, the atmosphere and the hype around it, it was incredible. I trained for a good seven months for my events and having run long distance getting down to 800m was fun – I was always on the track doing speed work.

“I knew I was fast but to win gold in all my events and a world record was overwhelming. I would just like to say that anyone is capable of anything. My motto is believe then achieve," Brett added.

CPI UK managing director for trade books Tanya Dunbar said she was “awestruck” by Brett’s achievements. “I am hugely impressed by what Ryan has done,” she said.

Brett is a trimmer operator on one of the paperback lines at the Kent plant and has worked at CPI Books for seven years.