Covid prompted Pensord to build back better, fit for a post-pandemic future.

Darren Coxon seems quietly confident reflecting on the shape of his business as we tentatively emerge towards a new normal.And after the lengths he and his team have gone to, over the past 18 months, to secure the foundations of Blackwood, South Wales print group Pensord, he’s probably earned the right.

In March last year the pandemic was tightening its grip across the country and, like most other businesses, hundreds of print jobs had been wiped from the books overnight. Pensord lost 50% of its work while sister firm, Aberystwyth-based commercial sheetfed printer Cambrian, which Pensord bought in 2017, lost 80%.

“No one knew how long it might go on for, how much cash we could lose or what long-term damage could be caused to the business,” says Pensord group chair Coxon. “So we pulled together a ‘Covid strategy team’ from both businesses and considered all eventualities and possibilities. We knew we had to plan for the worst-case scenario,” he states.

By April 2020, with all 61 Cambrian staff and half of Pensord’s 120-strong workforce furloughed, a plan was developed for a strategic restructure that would ensure the business could not only survive, but emerge from the situation as strong and healthy as possible for the future.

“There were numerous plans on the table and we chose the most robust one, which would enable us to secure the business moving forward and cause minimum disruption to the maximum number of people,” explains Coxon. Sadly, it was a plan that necessitated the closure of Cambrian’s manufacturing facility, retaining its business but transferring all operations to Pensord’s Blackwood site.

It was a huge blow to Coxon and his team, who had worked hard to bring the hugely reputable, family-run printer back to profit within two years of the acquisition, following 12 years of losses.

Coxon explains that while Pensord’s core business is in the fairly robust B2B space, with periodicals, monthlies and fortnightlies for example, Cambrian’s higher value products, such as books, brochures and catalogues, is a much more volatile market. 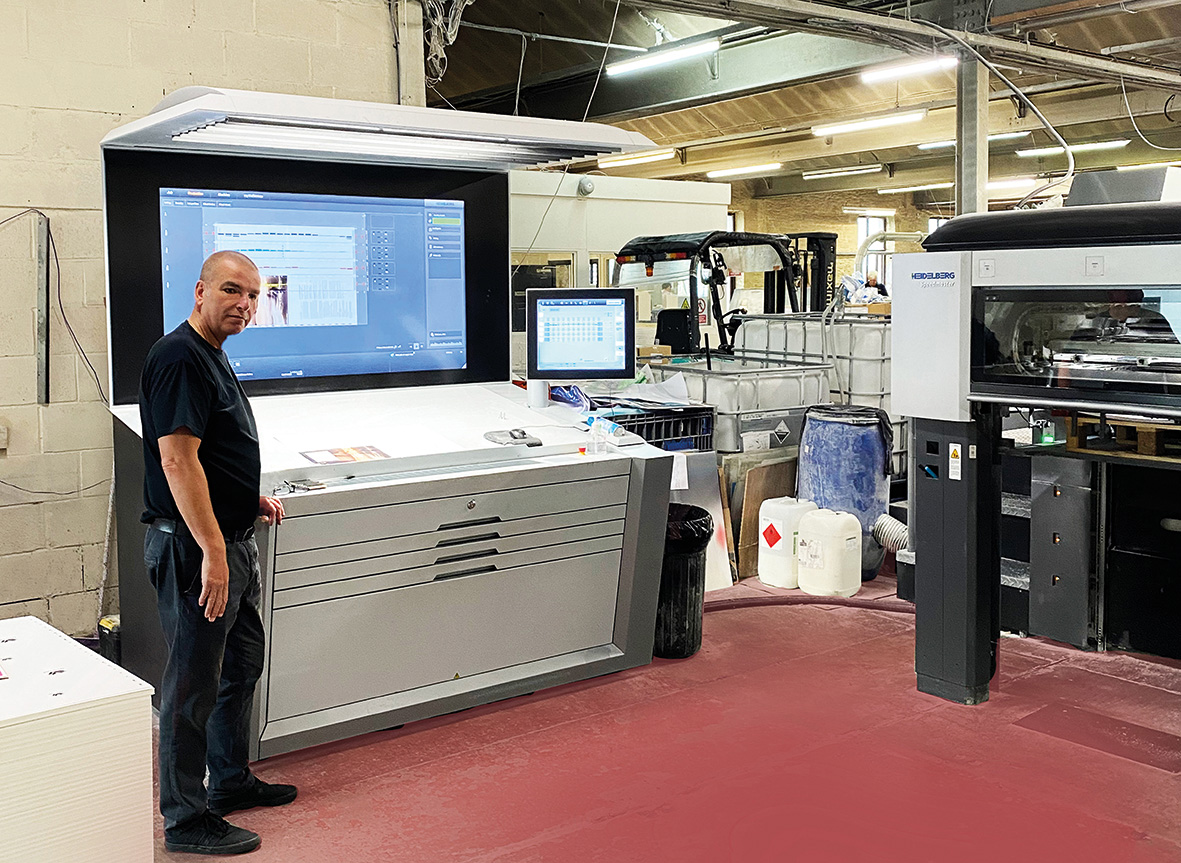 So a new structure for a merged production facility was agreed, and by the end of June backing for the plan was secured from bank Santander as well as funding through the government’s Coronavirus Business Interruption Loan Scheme (CBILS) “to cover for worst-case scenario”.

The business then went into consultation with Unite over the closure of the manufacturing operation at Cambrian and the resulting redundancies of the majority of the Aberystwyth staff.

“We invested heavily in legal advice so that we knew exactly what the process was and how we could best navigate it,” Coxon says. “You can get HR advice but TUPE law is a minefield and we didn’t want to take any risks. I think that’s something we did really well. You can’t stumble your way through that or you’ll find yourself in trouble.”

With some kit duplicated across both sites, a 10-colour B1 Koenig & Bauer press and a four-colour B1 Heidelberg press with coater were sold from Aberystwyth, helping to cover the cost of closure, while specialist kit such as the binding line, thread sewing, stitcher line and folding was moved to Blackwood to increase capacity at the site.

In addition, investments were made in the form of a third long perfecting press, a refurbed 10-colour K&B Rapida 106 press, while a new Xerox Iridesse digital printer was purchased for the firm’s digital arm, Pensord Digital, to not only add capacity but also to add the capability for metallic colours.

“We had to plan for work returning to something like normal and by merging the two sites – together they are bigger than Pensord – so we wanted another machine to ensure we had the capacity to allow us to cope with both lots of work,” says Coxon of the new Rapida.

By October 2020 the new kit had been installed at Blackwood and Aberystwyth was permanently closed, with key skills transferred to new staff at Blackwood through training from its experienced thread sewers, K&B and binding operators and pre-press staff.

Coxon explains that the merging of the two sites resulted in some duplication of roles such as manufacturing and operations directors, so the management team has been adapted with some remits being realigned and new roles created such as Pensord’s new sales director position, filled by the former sales manager at Cambrian.

“The reshuffle created the space for people to grow, for them to do their roles to the best of their abilities and to make sure roles are clear, especially in manufacturing,” says Coxon.

“My role has changed from managing director to group chairman to allow Karl [Gater] to grow into doing more commercial activity as group managing director. Once things begin to return to normal, whatever that looks like, I will be spending more time out on the road with clients and prospects, promoting the business and networking.

“We have also employed a new estimator and printer as we’re now starting to grow our team ready for what will hopefully be an up-turn in September.”

As well as navigating the painful practicalities of the merger, the team has used the past year to improve the group’s environmental performance, introducing a carbon balancing programme and switching to electric vehicles.

“It’s a combination of affording the time but also during the pandemic, the team became really focused on environmentally friendly solutions. People have travelled less and seen the positive impact that’s had on the world. It felt like the time was right for us and as directors we’ve all decided to move to electric vehicles. We’ve gone the whole hog: zero-to-landfill, carbon-balanced paper, electric vehicles. We’re doing everything we can,” states Coxon.

Brand alignment is another area that has come under the microscope with the firm building new estimating platforms, aligning emails and designing and launching a new website in April that brings the brands of Cambrian Printers, Pensord, Pensord Digital and Pensord Design all under the banner of the Pensord Group.

“We’ve done a lot in the background to streamline our services. It’s been an opportunity to hit reset in a number of areas,” Coxon says.

The quiet confidence shows in Coxon’s assertion that not only is the Pensord Group emerging with stronger foundations and leaner, more efficient, more environmentally friendly processes, but also with a highly trained and focused team, a clear direction and crucially strengthened bonds with its clients.

Coxon says: “There’s no getting away from the fact that our client relationships have really been boosted through this. Despite all the challenges, we have always managed to deliver what and when they’ve needed it. We’ve communicated a lot and tried to understand how they have been affected. We’ve worked with them to get it right within their reduced budgets, be it reduced paper weights, or issue sizes. There has been a lot of hand-holding.”

With a ‘new normal’ anticipated for this September, the team has planned on Cambrian’s business returning to around 70% of previous levels and Pensord’s 80%, explains Coxon. He says that the new capacity model is built to cater for that eventuality and points out that the group has significantly reduced its overheads by consolidating on one site. The transferred plant means there are two perfect binding lines, two saddle stitching lines and press capacity has increased by 50% catering for the combined work while allowing scope for growth. A combined management team also makes the business model more sustainable moving forward, he adds.

“Doing what we have been able to do has meant we have much better control over our finances and costs – we need less volume now to cover that. And by streamlining some of the processes and the way we do business it means that overall we feel in better control,” asserts Coxon.

“The pandemic came at an interesting time,” he reflects, adding: “Three years of Brexit-induced uncertainty and false starts in the business community has almost been forgotten as we have hit the biggest reset of our lifetimes.

“I think we’ve had the time and opportunity to get ourselves as fit for the future as we could do, whereas if we had just carried on as normal, we probably would have continued to be slightly imperfect. I’m hoping once we come out of this, we will have certainty, after so many years of uncertainty. And once we have that you can start to plan appropriately for the future.”

And as for the immediate future, Coxon says it’s about keeping an eye on volumes, manning and training to meet new demand and looking out for work thrown up as zombie companies fail in the wake of the pandemic.

“We’re on the ball, we have a keen eye and we’ll make the most of those opportunities when they happen,” Coxon states.

Inspection focus A strategic restructure designed for a post-pandemic future

Coxon believes that being decisive has been key for the business to emerge successfully from the past year. “We acted very quickly and treated the whole thing very seriously from day one,” he says. “We put in place a plan, we got the right people involved and we mapped it out and sought good advice.”

Seeking sound guidance and legal advice to steer the business safely and fairly through the merging process has been vital, he says. “Once Unite understood that we knew what we were talking about then the process was pretty seamless. I think that’s something we did really well.”

Under the unique circumstances of social distancing, communication with staff has been tricky, with much having to be in written form, which has frustrated Coxon. So moving forward, and with rules relaxed, the focus will be on personal communication and staff engagement