To the guru of screen print, Michel Caza

When I first received an email from my friend and colleague at ASPT, Mike Young, which said that my guru, Michel Caza was presented with the Howard A Parmele Award during the SGIA Expo in Las Vegas, I was thrilled. I decided to congratulate him on the phone first, rather than email. I called him on his mobile phone when he was in Vegas.

While talking to him, I noticed that he was very content because after a long wait his hard work had been recognised by this industry.

To honour Michel Caza, I decided to write this memoir as a tribute.

My father, Dhirubhai Mistry used to read a lot. He had an enormous library adorned with useful technical books and magazines. Even today, I have screen printing magazines and books dating back to the 1960’s (courtesy my father). My father had an eye for good articles. He used to make a copy of them and document them so that he could have an easy access. He made it a point to discuss good technical articles with me and share a few tips.

As a newcomer, I used to pay heed to his advice or sometimes pretended that I understood what he was saying. After my father’s death, I realised the value of technical information. Thereafter, I developed an appetite for updating my technical knowledge by reading books, articles and magazines.

I read a few remarkable articles. Some of my favourites were: The screen printing criteria in halftone printing by Hans Gerd Scheer and The screenprinting of fine line halftones by Michel Caza. I am mentioning Caza’s full name because at that time he was not my ‘guru’.

I was impressed by Caza’s in-depth knowledge and command over the subject. I found his articles easy to understand, lucid and practical. His articles became my ‘food for thought’ and a ‘dose of medicine’ to cure many day-to-day problems.

As I gained knowledge from his articles, I started hunting for more information about him and his technical articles. Later, I found that Caza had published a technical guide-book: The Techniques of Screenprinting which was compiled in a PDF format on a CD, comprising 1,400 pages with 17 videos. This CD demystified screen printing techniques for industrial, graphics, textile and art (serigraphy). On cue, I ordered my copy.

From that eureka moment I considered Michel Caza as my ‘remote’ guru yet to be embraced fully. In 2002, I joined the managing committee of Screen Printers’ Association of India (SPAI) and had organised a group tour for our members to visit Fespa 2002 in Madrid, Spain. The committee had a plan to hand-over mementos at Fespa, both to the incoming president (at that time) Ricardo Delgado and the outgoing president … it was Michel Caza!

Now I was 100% sure that I would get a chance to shake hands with Caza, my long pending ‘dream project’ ever since I started reading his technical articles. In fact why restrict it to a handshake, I was confident that I would get time to sit with him and discuss my problems related to screen printing.
I was fortunate to grab his attention at the Fespa stand and requested him to spend his valuable time with me. He was kind enough to concede to my request and he spent time with me sharing insights about screen printing.

Soon after the Fespa Madrid show, there was an exhibition – Screen Print India expo at Nehru Centre in Worli, Mumbai, where Caza was invited as a chief guest for the opening ceremony. This was followed by a full day technical seminar on fine lines and halftone screen printing.

In spite of being an exhibitor at that show, I attended his seminar. With the request of the organisers, my company gathered a large number of printers to attend his seminar. That was for the first time in the history of Indian screen printing industry I witnessed more than 155 screen printers attending a technical seminar even though the seminar fee was Rs 2,500 per person!

That’s why I call his prints – magical!

After the seminar, I requested Caza to allow me to see those prints closely and he was delighted to show and explain the tricks. For me Caza’s simple tips and tricks were not simple. It was not easy to understand because I didn’t know: ‘what is dot gain and what is gray balance’ in graphics process colour screen printing.

After attending his seminar I could not focus on the remaining days of that show. I had sleepless nights. I was restless. I wanted to know how I could learn these great "Michel Caza techniques" of screen printing fine lines and moiré free halftones. I was determined to learn these techniques.

Since this show, I was restless because at that time I could not find anyone in India like him who was a master in screen printing. A few weeks later I dared to write an email to Caza requesting him to teach me those techniques which he explained during his seminar in India.

He replied in a few hours saying: "You can pack your bag anytime and come to France to learn these techniques in my company Graficaza and stay till you are completely satisfied."

I was as thrilled as a child. Caza made it clear to me that during the training period, I could learn as much as I wanted. Surprisingly he was kind enough to offer me free training as he mentioned in his email that "I do not teach for money". Later I found that there were many lucky pupils like me to whom he had devoted his time, energy and superb technical knowledge.

In today’s professional world, who would impart such high knowledge free of cost? But Caza is unique and special. In fact this is called passion towards the industry.

The knowledge, which he shared with me is now being reaped by thousands of screen printers in India through our institute Dhirubhai Mistry Institute For Print Technology Research & Training (DMI).

I would like to congratulate my guru, Michel Caza, once again for being honoured with the Howard A Parmele Award. It has been long overdue and well-deserved. 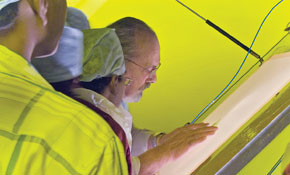 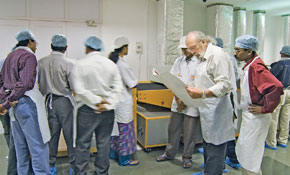 Caza: examining the quality of print during a workshop at DMI 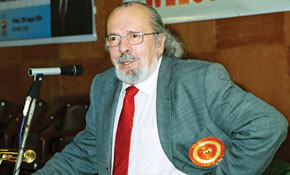 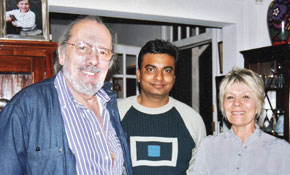 Mistry: with Caza and his wife 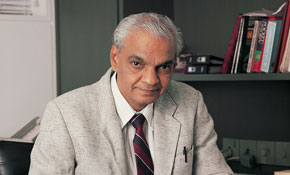 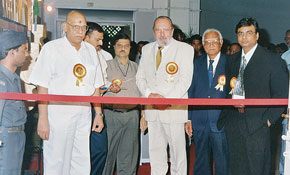