Last month, the National Apprenticeship Service announced that up to 20,000 apprenticeships were available on its system, while the latest statistics from the Department for Business, Innovation and Skills (BIS) show that over half a million people started an apprenticeship in the last academic year.

These are just some of the figures to come out of BIS in recent weeks as part of the government’s new focus and overhaul of the UK apprenticeship system. The shake-up follows the publication last year of the Richard Review of Apprenticeships, which examined how this traditional learning framework needs to be adapted to suit the changing times.

One of the recommendations of the review, which is currently under consultation, is a proposal to reform apprenticeship funding by giving the finance directly to employers. It is hoped this will allow businesses to take control of the training they provide by tailoring the content to their needs. The consultation closes on 1 October.

The proposals have attracted criticism from the BPIF, which says they don’t suit smaller businesses. "Most SMEs wouldn’t know how to go about structuring or managing a course. It’s reliant on an industry base to ensure that the resources are there to deliver," says chief executive Kathy Woodward.

PrintIT! programme director for Proskills Richard Moore says: "I would agree with the idea that an employer has more control over apprenticeships, but I’m not sure whether asking them to engage with the bureaucratic side is going to encourage them. I personally think it will turn them off."

Whatever the results of the consultation, apprenticeships are likely to be modernised. But according to the BPIF they have already been developing in the printing industry, especially over the past five years.

Contrary to common belief, they are no longer just for school leavers. Woodward explains that employers are showing a preference for people over 18, while mature employees are retraining, or upskilling, by undertaking apprenticeships. "It’s not young trainees anymore – it’s a professional qualification," she says.

This is compounded by a rising retirement age, meaning the industry has no exit volume and therefore fewer vacancies, as well as the shift towards digital technology, which is still too young to have a defined apprenticeship route. As a result of these evolutions, the path for young people to follow into print has grown narrower.

That’s not to say that young people have no way into print, Moore says. He explains that many come to the industry from graphics and media backgrounds, as those sectors are oversubscribed. Most importantly, they bring new digital skills with them. "I think that can really help print take advantage of rapidly changing business," he says.

Over the past few years, management and customer service apprenticeships have been on the rise in the industry, while an increasing number of digitally-based and social media routes are also making an appearance.

Fastsigns’ Sheffield plant currently has two young apprentices – one in production and the other in customer services. UK managing director Garth Allison says: "I think training in things like social media is a great idea. It’s a very real need in the industry. As more and more printers are providing multimedia campaigns, they will have to recruit a different, younger skillset."

But to attract a younger audience into print, the BPIF also believes that the terminology needs updating to acknowledge how this type of learning programme has evolved – traineeships instead of apprenticeships, perhaps?

Allison adds that print firms also need a better understanding of the benefits apprentices can bring to their business, in order to grow the practice within the industry. "There are a number of businesses with the scope to take them on. It’s a great way to expand your business and provide somebody with the training that’s required, to give them an opportunity," he says.

Moore agrees, saying: "It’s also financially beneficial. Research has shown that recruiting and training an apprentice brings a greater return on your investment in the long run than stealing an already trained person from your competitor." 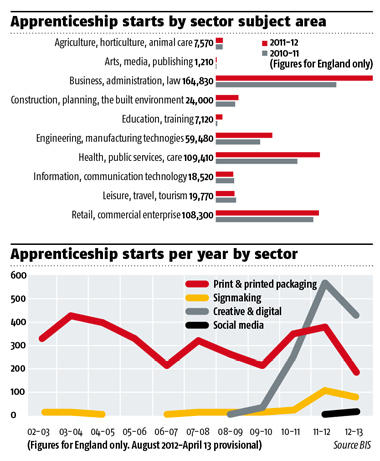