St Ives' display graphics division Service Graphics has reported a World Cup boost, following a gradual upturn in business over the past 10 months.

Scott King, sales director at Service Graphics, said: "The amount of extra promotional work linked in to the World Cup has been quite significant. That windfall work has bolstered the upturn that we've seen over the past nine to 10 months."

Among the extra work Service Graphics won as a result of the World Cup was a window display for John Lewis, which consisted of a map of the world overlaid with the markings from a football pitch.

In addition, the company was asked to supply graphics and hardware hire and install for an event in West Ham for the 4m-diameter inflatable Hyundai goodwill ball. Service Graphics produced a four-sided box from gantry that was clad in hard graphic, together with two backdrops with returns, which were covered in mesh banner material.

Meanwhile, St Ives Westerham Press was responsible for possibly the most high-profile piece of World Cup print this summer.

However, it was not for the World Cup in South Africa, but rather for England’s bid to host the 2018 World Cup.

It printed, finished and bound the 1,752-page, three volume, official bid book, 500 copies of which were delivered to Wembley last month.

See below the map of the world produced by Service Graphics for John Lewis: 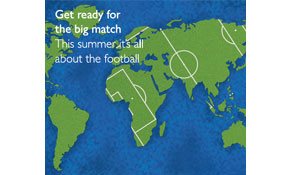