Printers across the country are in recovery mode after feeling the impact of the two storms that have wreaked havoc across the UK over the past two weeks.

Storm Ciara swept across the country over the weekend of 8-9 February and was followed this weekend by Storm Dennis. Both produced winds of up to 80mph combined with heavy rain, leaving trails of destruction in their wake, including widespread flooding.

Owner Andy Smith told Printweek: “We thought we’d walk down here on the Sunday to have a look [at the situation] and when we got here the water level was rising up.

“We managed to get in and then within an hour there was three feet of water in the building, so we’ve sadly lost a couple of automatic S. Roque carousels, a 12-colour and a four-colour, and a gas dryer on the ground floor. We’re trying to get them working but it’s looking like they could be gone.

“On Monday, Tuesday and Wednesday the water had gone down but it had left a huge amount of mess, mud and sludge, so it’s taken us about three days to get all cleaned back up. It’s a big area to clean and some of it is sewage so it’s not been a very nice job.” 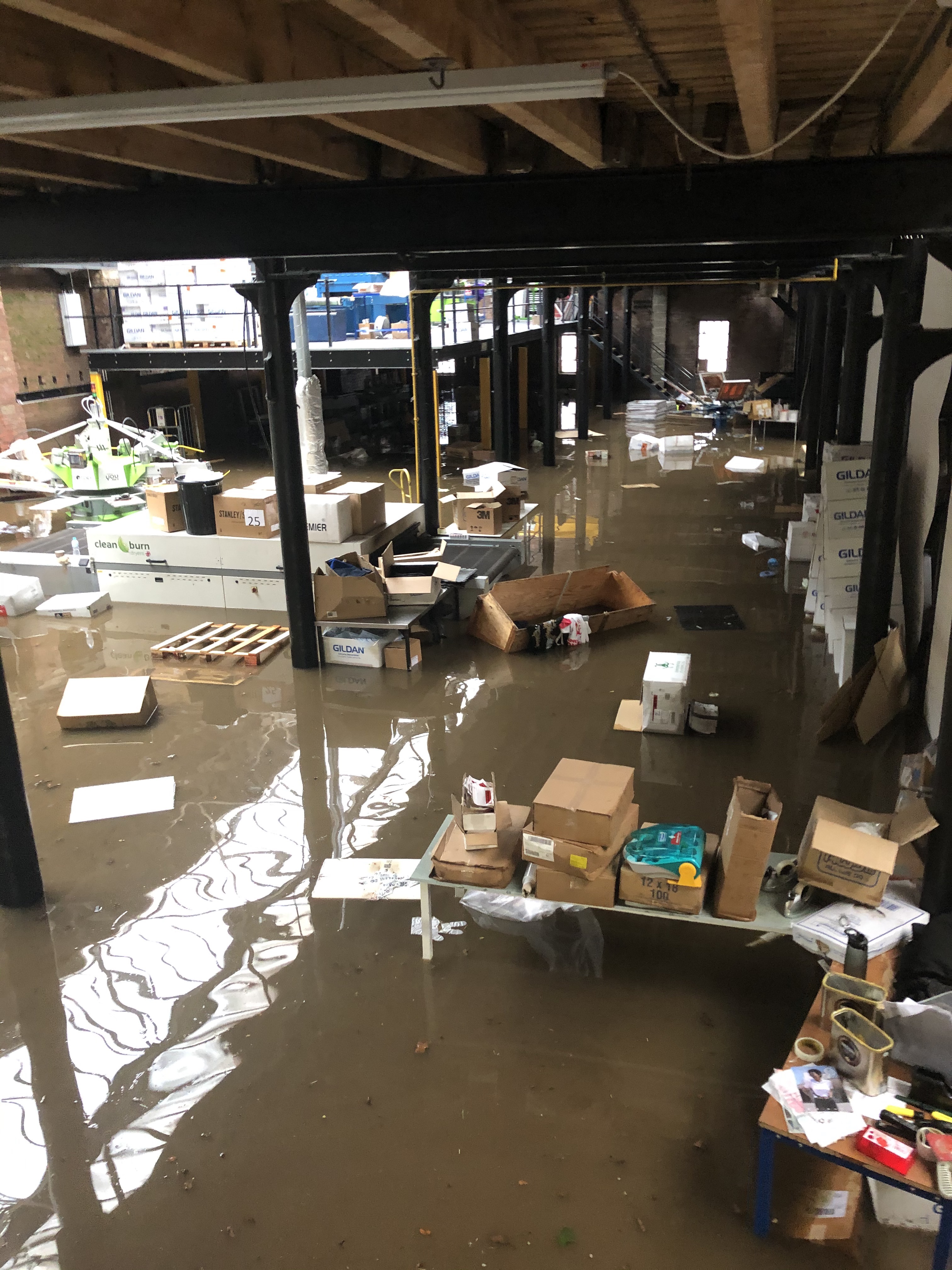 The business has another 10-colour S. Roque carousel on a mezzanine at its 1,500sqm site, so is still in production, and is currently running a day and night shift to ensure its customers are unaffected.

“But we need to get the other machines replaced or sorted as quickly as possible; they’re in the hands of the insurance companies now,” Smith added.

“The Calder Valley is notorious for flooding but we’ve not seen anything like this before. We’ll overcome it but we’ll have to move some things and get the other machinery raised up high.

“The one good thing that has come out of this is that everyone in the local area and everyone who works here has been amazing. Everyone gets stuck in; it’s a brilliant spirit, people just want to move on, and it makes you realise how much the company means to everyone.”

South Wales, Worcestershire, Herefordshire and Shropshire were among the areas worst hit by Storm Dennis, with many communities badly flooded over the weekend.

Ben Powell, marketing manager at Merthyr Tydfil-based magazine printer Stephens & George, said that the area around the local River Taff was “horrendous” but that the business had been “unaffected”.

“Touch wood we’ve been alright; the factory is all good and we’ve had no delivery problems.”

“With what has happened to our plants in the past, we have quite a rigid plan of clearing drains at regular intervals throughout the year,” he told Printweek.

“Some of the neighbouring communities have been less lucky, devastating their houses and communities, but how can you prepare for two big storms in a week after a couple of months of wet weather? Hopefully that’s the worst of it over with, although the next two weeks’ forecast is still rain, rain and more rain! Anybody building arks?”

Specialist printer Bedford Dials is located right in the middle of Tenbury Wells, Worcestershire, which was badly flooded. The company said it was “fine”, with no flooding to its premises, but that other businesses in the town’s high street had suffered.

The River Teme in Ludlow remained subject to a severe flood warning this morning although Ludlow Bookbinders, which is right next to the river, said it had been “unaffected”.