On the road: printers present their transports of delight

White van man is something of a ubiquitous feature of roads up and down the UK. The epithet conjures up images of a filthy old Transit with a dashboard littered with yellowing copies of The Sun, disregarded parking tickets and previously enjoyed fast-food packaging. Oh, and likely enough there'll be a rude message scrawled in the grime on the back.

Printers, however, are a cut above such stereotypes. Rather than a white van, their vehicles are more likely to feature an eye-catching design in – what else – CMYK.

Even though it’s far more practical for most printers  to outsource their major transportation requirements to  a specialist haulage provider, it’s a rare company indeed  that won’t want the flexibility of having at least one van  of its own.

And as van and driver are a crucial part of a company’s service offering and brand image, finding the right wheels and a suitably reliable driver is an essential part of pro-viding a quality service.

There are additional benefits, too, as Martyn Hicks,  sales director at Screenprint Productions in Brighouse quips: "A van is useful for local deliveries, occasional showing off in front of customers, and for staff to move  their sofas at weekends." 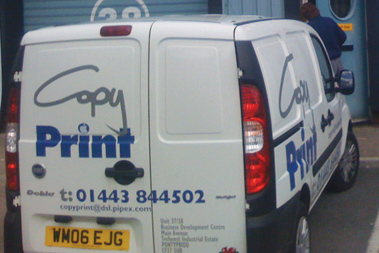 "We particularly love our Fiat Doblo," says managing director Nick Bush. "It looks friendly. It has two sliding doors so it’s also very practical. We’ve had it ages, probably five years, because we love it so much. We do about 100,000 miles a year in it, and we get 60 miles to the gallon."

Copyprint also has an additional trailer for the Doblo to provide extra capacity when needed. "The graphics carry on to the trailer as well, so it looks fantastic," he enthuses. "Our logo was designed in the 1980s so it looks a bit cheesy now, but it’s well known."

There’s bad news for Fiat, though, it seems that design changes by the manufacturer means it will lose out on a potential repeat order. "Unfortunately, the new one doesn’t look like this anymore so we probably won’t get another one," laments Bush. 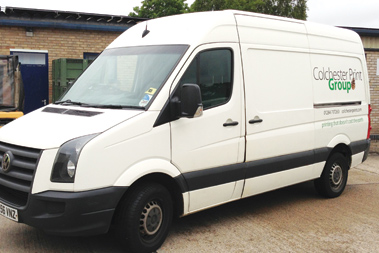 Colchester Print Group operations manager Simon Matthews has a busy time organising deliveries across East Anglia as well as to London. One van is kept plain to cater for those customers who require the delivery equivalent of plain brown paper wrapping.

"The VW Crafters have quite a high ceiling so we can fit more in – we produce a lot of folders, which are bulky but not necessarily heavy, so that sort of capacity is important to us. We line our vans with chipboard to protect them and provide secure loading," Matthews says.

The smaller Ford Connect can carry 600kg and is "ideal for smaller, ‘nipping-about’ jobs."

Matthews is keeping an eye on the eco options but hasn’t found anything suitable just yet. "The technology is not quite there yet. We’ve looked at electric vans but the distances we go mean that’s not viable for us yet." 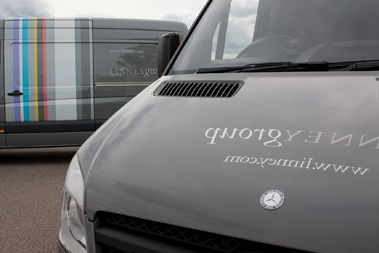 We’re going to let you into a secret: when it comes to attention-grabbing haulage methods Linney Group has the top trump of all top trumps housed at its Mansfield headquarters.

Hang around near the A38 at Mansfield long enough and you might just catch a glimpse of The Transformers’ Optimus Prime – we kid you not! As part of its beyond print offering, the group sourced and branded a monster US truck – a Peterbilt 379 with extra-long hood – on behalf of client Hasbro. Optimus Prime makes guest appearances at special events up and down the country creating delight among small boys (and some grown-up ones) wherever it goes.

But Optimus Prime is for special occasions only and certainly not suitable for routine deliveries. For that task the company turns to the perennially popular Mercedes Sprinter.

"There are lots of things we like about them," explains transport manager Peter Stojanovic, as he reels off a list of features.  "The three-year unlimited mileage warranty is a big plus point. Our vans probably do at least 80,000 miles a year.

"They never break down, they are super-reliable and really comfortable with good facilities for the driver in terms of space and comfort. And the latest model has collision alerts front and back, which is handy when the driver could be manoeuvring in unfamiliar spaces.

"The Sprinter also has nice wide loading doors and we have the high roof version – a six-foot-tall person can pretty much stand inside the van," Stojanovic adds. And, while not quite as head-turning as the Optimus Prime, "they do look very smart". 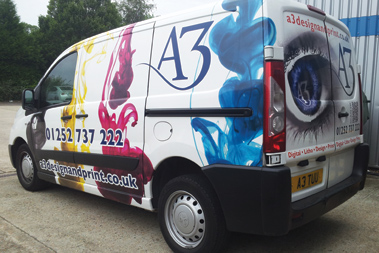 A cautionary tale from Tony Pooles, managing director at Farnham-based A3 Design & Print. The firm used to have a Ford Transit van but it was stolen in the middle of the night by thieves who had obviously targeted the vehicle; putting it on low-loader to remove it from outside the firm’s premises. The van was subsequently found burnt out, minus its engine.

"It was all captured on CCTV but the police said there wasn’t enough evidence to go on. We stayed away from Ford after that," says Pooles. "That’s the reason we got the Peugeot Expert.

"It’s the third van we’ve had and we always make an effort to make them stand out. Customers say that what they like about A3 is our eye for detail, hence the massive eye on the van graphics with our logo pinging out of it."

The Expert has proved itself worthy for A3’s requirements. "It’s going back and forth all day to London and the South Coast. It probably does 85,000 miles a year," Pooles adds.

"The configuration is practical, too. We have a side door on both sides as well as the back doors, so if you’re parking at the kerbside it doesn’t matter which side it is, we can offload quickly."

And while Pooles loves the van, it’s the Scorpion tracker system he subsequently installed on it that really revs him up. "It means that at any time we can pinpoint exactly where the van is and what speed it’s going. It will ping us an email when the driver has parked up for a delivery."

The tracker system also provides a genuinely accurate alternative to the sometimes unconvincing ‘he’s 10 minutes away’, as Pooles explains: "If a customer wants to know how long it will be before the delivery arrives, we can look online and tell them exactly where it is – we can say ‘he’s at the corner of this road and that street’ and they will know the van really is only a few minutes away."

"It will also calculate fuel consumption. It really is very, very useful," he adds.

Most of all, though, A3 wants to be in control of its own time-sensitive deliveries. "Some of the same-day couriers can be a law unto themselves. There’s no nonsense with this. It’s our own van and there’s a tracker in it." 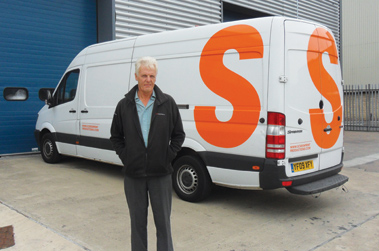 Screenprint Productions produces large volumes of point-of-sale work, often in large formats, using its range of screen and digital printing kit. As such, it is often dealing with campaigns that need to be fed into complex distribution networks in tight timescales. For this type of project it works with a specialist transport company partner and fast couriers. The firm is poised to brand a couple of its contractors’ 40ft lorries with its own livery.

However, having in-house transport facilities remains important to the business, and sales director Martyn Hicks describes the Mercedes Sprinter as quite simply "brilliant".

"We’re actually getting a new one next week. They are nippy and it’s a good image for the business – German and efficient," he says.

"There’s also the added bonus of our legendarily taciturn delivery driver Howard. People ring up and say ‘are you delivering?’ I’ll ask them to look out of the window and if they can see a grey cloud in the distance it’ll be Howard coming up the valley."

The only downside experienced by the company was the theft of the entire exhaust system from one of its vans. "They cost £800 and when we went to get it replaced it turns out Mercedes has developed a special security device for the exhaust because this is such a problem."

Ultimately, Hick wouldn’t be without the company wheels. "A van is useful for local deliveries, occasional showing off in front of customers, and for staff to move their sofas at weekends."