In his own words, Tom Willday has been part of his fourth-generation, family-owned printing business since he was in a pram. As a toddler he would regularly sit at the front desk of the Leicester-based SME, eventually helping out around the business as age and understanding allowed.

Now managing director of eight-staff Alfred Willday & Son, the business that was founded by his great-grandfather and grandfather 77 years ago, Willday formally joined the business 12 years ago after initially training as an engineer at a Nottingham power station.

“Before that I’d always been around helping Dad out, but then I started here basically as the tea boy and worked my way up on each machine, gaining respect from the staff and then starting to run the business when Dad retired,” Willday reminisces.

He continues: “Dad has been instrumental in helping me and it’s great to have him as a sounding board. His knowledge is amazing; he can fix anything and he’s helped me understand how to get around all sorts of challenges.”

One such challenge has been the development of an entirely new product and business arm, Willsow.

Willday describes how, around eight years ago at a family gathering, the idea to create a fully biodegradable, plantable children’s book germinated in his mind. “I’d already come across seeded paper but when I was there, it suddenly occurred to me: there were kids looking at a book inside and I was outside helping my grandpa in the garden. I thought, ‘what about plantable books?’”

“I’d seen some business cards, thank-you cards and birthday cards in seeded paper, but not books. It’s been out there for a while, but the idea to educate children – get them reading and get them gardening – is new. I wanted it to be more of a quality gift than a gimmick,” he states. 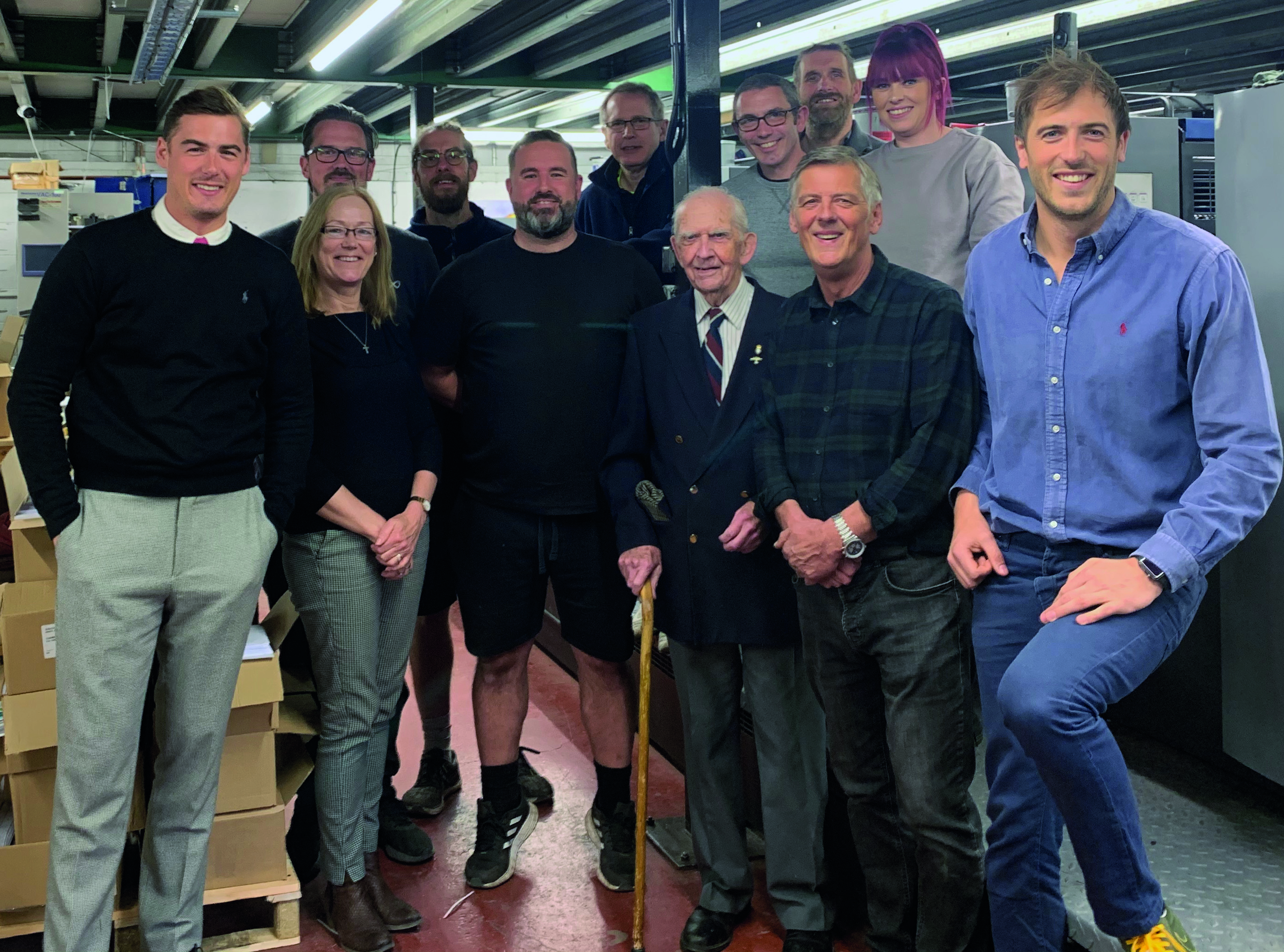 Using skills learned during his seven years in the engineering arena, Willday began researching and developing the idea, but not before he’d run it by his father and colleagues.

“My dad is very practical-minded and when I told him about it he said it was great, but that I needed to focus on Willday as a priority. They were all totally supportive but just not too sure, after all this was a completely new idea and they already had a great business. I understood that, but once I presented them with a physical book they were sold,” Willday explains.

Wanting to keep his idea firmly under wraps from the rest of the industry, Willday leant on those nearest to him and the close-knit, highly-experienced team at the business for guidance.

The team began to research paper and manufacturers, how the paper might be printed on and bound using non-toxic and environmentally-sound products and what might be the perfect page size and pagination.

“There was a lot of thought that went into it,” says Willday. “The main advice I took was from my parents and the staff – we have people who’ve worked here for 20 or 30 years, so they are incredibly experienced and knowledgeable.”

A non-negotiable detail for Willday was to ensure that all aspects of the materials and production adhered to the business’s strict sustainability policies; not only is Willday Printers’ Leicester-based factory powered by alternative energy, the business is a member of a Carbon Capture Scheme, the Woodland Trust and the FSC among others, while waste is recycled.

Willday settled on using vegetable oil-based inks and negotiated a deal with an unnamed UK manufacturer to create FSC-approved, non-GMO-seeded paper. He also agreed an exclusivity deal on new seed options being planned for the future. Furthermore the business pays a premium on the sheets towards carbon capture. He also devised a system of recycling all non-seeded page offcuts, while seeded page offcuts are donated to children’s homes, hospices and schools.

“It took me a long time to research the paper, how to print it and finish it properly and to build a rapport with the suppliers. It’s not as simple as just putting paper onto a press. We almost had to break a machine to fix it, for it to work properly and feed properly,” explains Willday.

“We spent a lot on developing things to make it print properly and find the correct inks that aren’t harmful to the environment. Working out the printing process alone took about six months as well as designing and developing the books for the press,” he continues.

Willday commends the supportive nature of the Leicester business community and credits it with helping him find the solution to the tricky binding process.

He explains: “We’ve always bound books with glue, which is toxic to plants, and used staples, which aren’t good for the environment. So I approached a big hosiery company here in Leicester and asked if they could help with the binding.

“We tried various machines but they didn’t work. Finally, one of my mum’s friends who used to work in hosiery in Leicester offered to try using her old Singer sewing machine to stitch them and it worked. My girlfriend is a fashion buyer so she understood the perfect thread to go for in terms of strength, use and sustainability and we opted for natural cotton.

“Once we had all the elements together, the testing and growing processes in itself took a good year because obviously planting is only possible during the summer season,” adds Willday.

Alongside the research and production of the physical books, work was also underway to create the all-important content for a series of five books whose pages contained parsley, dill, basil, carrot and lettuce seeds.

“We began to put the stories together around the seeds,” says Willday. “We wanted to create stories that would teach children about sustainability, the environment, where things come from that have been recycled and the idea that everything isn’t perfect, which is demonstrated by the roughness and uncoated character of our books. We also wanted to give the books hidden meanings such as the idea of teamwork, which is the theme of our carrot book.”

Again, finding his team around him, Willday appointed friends from the copywriting and illustrating space, Tom Lines and Tom Ward respectively, to deliver those aspects.

With the product complete Willday ‘soft’ launched new off-shoot company Willsow to sell the books, initially through its website but gradually in garden centres, florists and gift shops.

He explains that in the beginning the idea was to keep away from the mainstream because they wanted to quietly get customer feedback and tweak the books without alerting competition to its innovative new product.

Following initial feedback, seeds were removed from all but the outer pages of the books, both to lower the retail price but also because people reported wanting to keep the illustrations and stories rather than plant the whole book.

It’s a stage of development that Willday describes as challenging, because as the concept creator, he’d envisaged seeds in every page. But he says his belief in listening to the customer was right and that the changes paid off.

Willsow was founded in October 2019 and sold its first books through the website in November. It soon earned the Award for Innovation in Education and Training at the 2020 Leicestershire Live Innovation awards and book sales began to climb.

The brand quickly popped up on The Dragons’ Den radar, filming and featuring in an episode with the BBC programme in May 2021, during which the team secured the backing of entrepreneur Sara Davies. Meanwhile Willsow books scooped best new product on Not On The High Street and orders have continued to grow fast with major coups including orders from Selfridges in April and Paperchase just last month.

“We seem to have a pinch-me moment every week – or sometimes every day. A huge order or incredible feedback. We were even invited to the Royal Lodge in Windsor for afternoon tea, earlier this year, by the Duchess of York and she congratulated us on our work. And we’ve just won Business Executive of the Year for Small business in Leicester. It’s just brilliant,” Willday enthuses.

Willsow has turned over double what it forecasted, making £23,000 in its first year and exploding tenfold in the last year to turn over £240,000.

The financial success is obviously very welcome, says Willday, particularly after the pandemic, during which he kept all staff in employment at Willday and recruited two new hires to help run Willsow. But, he says that for him, success means something different.

“Being able to give magic like this to children and seeing their eyes light up when you tell them they can plant their book or having people contact us saying their children wouldn’t eat vegetables but since growing the books they will. It’s amazing,” Willday says.

“And employing a young person just out of university. That’s success. To offer someone at such a young age a full time job in something they love. He’s in charge of marketing and there’s no ceiling, so it opens up his future. Or employing someone who lost their job during Covid – to take her on as accounts manager is brilliant. We’ve also been able to employ two more in Willday as a result of the success of Willsow.

“That’s the real success of it,” he states.

Willday says putting time aside to develop an idea is vital. “When someone is creating an idea, most of the time they’re doing a different job at the same time. It’s very difficult to put time aside to do something that’s never been done before. It took me eight years because I needed to prioritise our work at Willday first,” he says.

“If you have an idea you think might be worth something, give it a try and run with it,” Willday states. “Trust yourself, you’re only here once. The people that are around you are vital. It can be hard to hear things you don’t agree with, but try everything and listen to everyone.”

Above all Willday believes it’s critical to enjoy what you’re doing. “Otherwise, what’s the point?”