Show me the money

When it comes to effective and impactful marketing, print still trumps all others, says Jon Severs

We are all, if we are honest, shallower than we’d like to think we are. As consumers, we are particularly adept at judging books by their covers, and if a piece of marketing collateral, shop display or, indeed, book cover fails to arouse our senses, our interest or our imaginations, then we find it very easy to ignore. A company may have developed the best thing since sliced bread, but if the product is not properly marketed, the chances are that it will flounder.

It’s clear that effective marketing is not an easy business. On today’s crowded supermarket shelves and retail-driven high streets, there are plenty of suitors for the consumer’s attention. Standing out from the crowd is harder than ever. It can also be expensive and, in the current economic climate, the mantra ‘return on investment’ is on everyone’s lips – not just the financial director’s.

This, of course, is good news for print. As the following examples demonstrate, print provides the scope for the diversity, potential and creativity required to attract the customer and secure that essential return on investment.

Each of the following projects proves that print, despite the threat from rival media, still has pride of place in its traditional markets of packaging, catalogues, marketing, posters and point of sale, offering high-quality products that deliver a real return to clients. It’s clear that product managers and marketers are still turning to print first, showing that the medium continues to imprint itself on the buying public in a way more meaningful than digital has yet to manage. 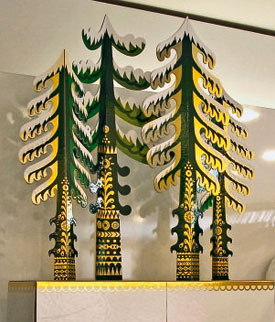 Marks & Spencer point of sale
"If M&S had tried to create its Christmas point of sale (POS) campaign on MDF rather than print, it would have been cost prohibitive," reveals Derek Wallis, managing director of Harlequin Display Group. "The print is not a cheap item, but trying to do it any other way would give you such high costs it would be impossible."

POS, then, is still very much a print medium. Print offers the quality, flexibility and robustness without an astronomical price tag. In terms of return on investment, it is still very difficult to beat it.

M&S seems to agree. Its campaign incorporated the shapes of the wider Christmas campaign (snowflakes and Christmas trees) and so mirrored images seen on television and on other marketing mediums. It had to be robust to withstand the Christmas rush and also be of the quality an M&S customer would expect. It also had to be done on a fairly limited budget.

"M&S was thrilled with what we came up with and, though the run lengths were hefty, we built into the design the ability to do one-offs for, say, the store window in Marble Arch or for smaller table tops in, say, Bromley," reveals Wallis.

M&S was so thrilled that from February, Harlequin will be working on next year’s M&S Christmas campaign. Wallis is confident that, in the retail sector especially, print still represents the most sensible investment when it comes to POS.

"There are lots of ways to present products in store, but POS is a fairly economical and substantial way of providing a lot of information and holding a lot of product," says Wallis. "It is still very much relevant and part of the retail offering."

The Eyepet carrier
Packaging can often be overlooked as a marketing medium, but investment at this stage can deliver a massive return. This is something Sony was in tune with. When it wanted an eye-catching packaging for a computer game that recreated the experience of owning a pet, it handed the creative reigns to packaging specialist AGI.

Not only was Sony thrilled with the results, believing the innovative design and print helped the product attract passing customers into a purchase, but the media at large responded in raptures, generating masses of publicity – The Times, for example, singled the design out for special mention – and so the packaging proved a canny marketing tactic.

Rudy Martinez, AGI packaging development manager, says the key to the success was that Sony was open-minded enough to allow AGI to push the boundaries of print and pack design.

"We wanted something more interesting than the standard square boxes, so we came up with the pet carrier design," he explains. "Both the national press and specialist websites got very excited about the packaging, so it was great advertising for Sony, which got credit for investing in such a stand-out product. It is so different and it talks to people, it tells a story, and that has proved very successful with consumers. It gave them their first reason to buy."

Pushing the boundary did cause AGI some issues, most notably it had never printed on the material needed for the design to work, N-flute, before. It was unafraid to try new things, however, and after testing the design was made to work and the first run consisted of more than 250,000 packs.

"The number of reprints we have had on the pack since just shows how much of a success it has been for all those involved," concludes Martinez. 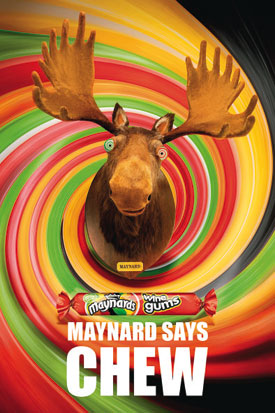 Maynards poster
The growth in the number of digital screens used for advertising might make you think that printed posters have had their day, but in fact product managers and marketers are opting for the printed product more than ever because of its far greater cost effectiveness and the incredible colour quality and clarity possible. Also, a poster is still the most flexible, diverse and malleable medium out there.

Maynards thought so too and was after a punchy design for a promotion of its Wine Gums brand, hence the colour demands for the project were very high. Also, Maynards wanted the poster to be as effective at night as it was during the day. The poster, then, presented a number of challenges for printer Odessa Offset.

Bob Charles, Odessa Offset managing director, explains that the job was brought to the company by creative agency Fallon, which had come up with the Maynard’s Moose campaign. The design was centred on the accentuated colours and these needed to be maintained when the poster was backlit for night-time viewing. Charles and his team came up with a plan to make this happen.

"The poster’s creative was so punchy, that we used the following methods to maintain the best possible result day and night," he reveals. "The posters were printed on our KBA 205 and we used a higher screen ruling on the front of the poster to maintain detail and we also reverse printed the poster so when they were illuminated at night they didn’t look washed out and would look as good illuminated as they did when unilluminated."

Maynards was extremely pleased with the results and the response to the posters on the streets of the UK from consumers was just as positive. It goes to show that the printed poster is still the medium of choice for a high-impact, punchy campaign over digital rivals. 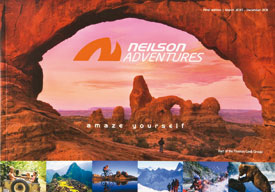 Catalogue for Neilson Adventures
"We are seeing catalogue production increasing," reveals Mike Bending, senior sales manager at Precision Colour Print (PCP). "A classic example is ASOS, which was a purely online fashion retail outlet that is now printing a catalogue. Companies like to show customers something tangible."

Neilson Adventures, a provider of luxury holidays in exotic locations, certainly agreed. Providing a range of high-quality destinations demanded a similarly high-class selling product and so Thomas Cook, which Neilson is part of, decided to print its first ever A4 landscape format catalogue featuring exceptional photography of the travel products. PCP was the printer in charge and Bending says the format was perfect for the product.

"With the sort of holidays they are selling, which are very expensive exotic locations, having a big landscape photograph does lend itself to the format and the overall product," he reveals.

He adds that excellent design quality was matched by careful printing with colour accuracy crucial to recreating the dramatic photography featured. Binding and fold accuracy was also crucial for imagery, as at several points the photograph was put across a double-page spread.

The response to the final product was overwhelmingly positive. Thomas Cook was so impressed they immediately booked PCP for the next issue. Meanwhile, the customers were obviously just as enthusiastic, as Bending explains.

"It certainly has helped Nielson’s sales," he reveals. "Normally, a brochure like this only has one or a maximum of two editions per year. This year they have printed three editions, which just shows how good the uptake has been."

Land Rover Discovery mail shot
In the past 10 years, direct mail has become increasingly under attack from digital rivals and environmental groups, but both threats have been rather overblown. DM is more targeted and less wasteful than ever, so environmentally it performs very well, while its effectiveness compared to digital rivals is, according to Geoff Neal Litho managing director Sam Neal, only improving.

"All our clients are obviously getting the return on investment they need from DM as they are spending significant amounts of money on each pack and they keep coming back again and again," says Neal. "The challenge for us is that they come up with increasingly clever ideas and we need to respond to that."

Land Rover is one such company that made DM a key part of its marketing campaigns. The launch pack for its Discovery 4 model, printed by Geoff Neal Litho, featured a number of challenges and all involved were also mindful of the pack’s environmental impact.

In terms of the latter, the job was produced using vegetables inks and FSC stocks, while for colour and quality, ISO 12647/2 was adhered to. The job itself was made up of complex elements, such as a die-cut Discovery, and so five or six prototypes were made and tested to ensure that everything was right, including the price point in order to ensure the most cost effective job for the customer.

And the customer, Land Rover, was certainly pleased with the efforts made, according to Neal.

"Land Rover was over the moon," he reveals. "They loved the job."

The agency too, was impressed, returning to Geoff Neal Litho for a host of new DM packs. For ROI, print is clearly still the medium of choice for marketing campaigns.